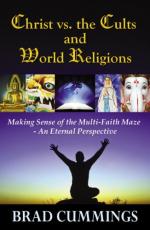 Get Cult vs. Religion from Amazon.com
View the Study Pack

This student essay consists of approximately 2 pages of analysis of Cult vs. Religion.

Summary: The different connotation of words with similar meanings and how they influence others. In this case Religion and Cult.
"Whatever words we utter should be chosen with care for people will hear them and be influenced by them for good or ill."

The word cult is a group of religious beliefs that has come to be associated with being evil and wrong. Cult has been given a bad label because of the situations that it is linked with. Journalist and others in religious groups use the word cult when something goes wrong. In South America when Reverend Jim Jones' followers all committed...

More summaries and resources for teaching or studying Cult.