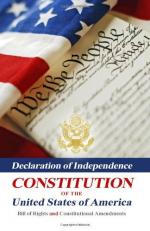 Get The Bill of Rights from Amazon.com
View the Study Pack

This student essay consists of approximately 1 page of analysis of The Bill of Rights.

The Bill of Rights

Summary: Provides a brief summary of the Bill of Rights.
One of the conditions set by the several states for ratifying the Constitution was the inclusion of a bill of rights. Many people feared that a stronger central government might take away basic rights of the people that had been guaranteed in state constitutions. If the three words that begin the preamble--"We the people"--were truly meant, then the rights of the people needed to be protected.

First Amendment Freedom of speech, religon,press assembly, petition. Can't support or interfere w/ religon Express and hear ideas of others Can congregate and suggest to change or make new laws

States maintain a militia for emergencies, people have the right to own weapons

Government needs a search warrant to look for evidence...

More summaries and resources for teaching or studying United States Bill of Rights.

The Bill of Rights from BookRags. (c)2021 BookRags, Inc. All rights reserved.