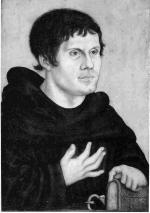 Get Martin Luther's Battles with the Catholic Church from Amazon.com
View the Study Pack

This student essay consists of approximately 2 pages of analysis of Martin Luther's Battles with the Catholic Church.

Summary: My essay is about Martin Luther and his battles with the Catholic church.
Indulgences, which were granted by the pope, forgave individual sinners (evil doers) not their sins (evil dones). These indulgences had become a great way to make riches. Luther's Theses, which were against the use of indulgences, were based on the idea that Christianity is basically an idea of the human race and had little or nothing to do with the heaven or hell, such as temporal punishments. These arguments were not taken kindly by the church folk which led to Luther being hauled into court in 1518 to defend his arguments against the cardinal (head pope). The interview focused on the spiritual value of "good works", (the actions that people do that benefit others and pay off with God in the long run, The cardinal lost his temper and demanded that Luther recant The Northern Humanists embraced Luther and his ideas. Luther's first writing was The Sermon on Good Works, in which he argued that "good works do not benefit the soul; only faith could do that."

Pope Leo declared 41 articles of Luther's teachings as unorthodox teachings, and Luther's books were burned in Rome. This only made Luther try harder to reform the church. He asked the Christian Nobility of Germany to use military means to force the church to discuss unfairness' and reform; "A Prelude concerning the Babylonish Captivity of the Church" literally called for clergy in the church to openly revolt against Rome.

The role of the individual is one of Luther's many points which have stood the test of time even to this day. Everyone wants to stand out, when the Catholic Church was around everyone had to go to church that was just the way it was. However once Luther stressed his ideas to the public people now didn't have to go to church, they had to be faithful but they didn't have to go to church. The next thing that he did was he stopped indulgences saying that you couldn't get a place in heaven based on 1 simple act but god will judge you by the way that you live your life. This theory has helped millions of people because of the fact that if they do 1 wrong but they have lead a good life then they won't get put in hell for that 1 wrong.

More summaries and resources for teaching or studying Martin Luther.