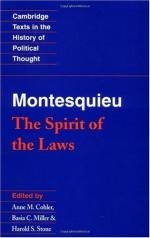 Get Montesquieu from Amazon.com
View the Study Pack

This student essay consists of approximately 2 pages of analysis of Montesquieu.

Summary: This is an infomrative essay about Montesquieu's philosophies.
· His full name was Baron de la Brede et de Montesquieu

· He widely traveled, received a decent education and studied Latin and writing

· Aside from being a philosopher he was a jurist and a satirist.

· He published Persian Letters. In these letters he criticized the French culture and society. He mocked the king, absolute monarchy, parliament, academy, university and most of all the Catholic religion.

· One of his greatest pieces was The Spirit of the Laws, which compares the three different types of government - republic, monarchy and despotism. Its major theories were that climate and status determine the forms of governments and the powers...