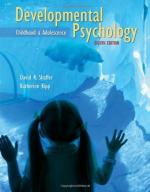 Get Early or Young Adulthood: a Case Study from Amazon.com
View the Study Pack

This student essay consists of approximately 2 pages of analysis of Early or Young Adulthood.

Summary: Essay provides a case study of psychological development of an unnamed subject.

I observed a 19-year-old female, named Claudette (name has been changed for confidentiality). In the past year Claudette graduated from the high school she attended for her whole high school career. She holds a full time job and works a part time job on the weekend for some extra spending money. Claudette lives in a local apartment with 2 roommates. Although she doesn't live at home she holds close relationships with her parents that only live about an hour away. Claudette goes out frequently and has a steady boyfriend, she would be in college studying to be a physical therapist at this time, but she decided to take a year off to be financially ready. I think that Claudette would be considered a young adult and be in the early adulthood stages.

Even though in class we learned that Claudette being only 19 would generally fall into the...

More summaries and resources for teaching or studying Developmental psychology.