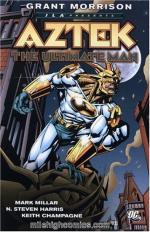 Get Azteks from Amazon.com
View the Study Pack

This student essay consists of approximately 1 page of analysis of Azteks.

Summary: Essay briefly describes the Azteks.
Following their god's orders, the Azteks marched on until they reached the sign that meant to stop, an eagle on a cactus with a snake in its mouth. They had settled in the Valley of Mexico.

The Azteks built the city of Tenochtitlan. As many as 300,000 people lived there. There was not enough room for gardens and crops, so they built floating gardens. They also created more farmland by carving terraces into the hillsides. Azteks sent out armies to conquer other peoples in the Valley of Mexico. Soon they had created an empire that stretched from the Atlantic to Pacific oceans.

The Azteks worshipped their god with human blood. They even played a game where the losing team gets killed and sacrificed. That's pretty sick if you ask me.