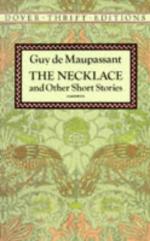 Summary: Essay provides a character comparison of Mathilde Loisel from "The Scarlet Ibis" by James Hurst and Doodle's brother from "The Necklace" by Guy de Maupassant.
Character Comparison and Contrast

"The Necklace" by Guy de Maupassant and James Hurst's "The Scarlet Ibis" are two unarguably divergent short stories .The stories have similarities and differences in two of their characters, Doodle's brother and Mathilde Loisel respectively. While they both tend to be concerned with appearances,are resentful of something, and have excessive pride they differ in their actions especially in self sacrifice, deception, and actions beneficial to others.

Although Doodle's Brother and Mathilde Loisel are in different time and geographical settings they both end up in the same situation in which they are ashamed of their family or friends.