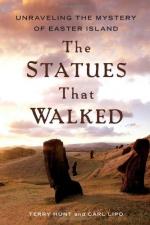 Get Easter Island from Amazon.com
View the Study Pack

This student essay consists of approximately 2 pages of analysis of Easter Island.

Summary: Essay provides a brief description of Easter Island.
Using the understanding scientific research has given us, give a brief history of the important events that occurred on Easter Island.

Scientists today have done much research about Easter Island which helps us better understand what happened. Each event that has occurred at Easter Island helps us explain the history behind everything. The islands very first people came to the triangular island around 400 and 800 AD. These people known as Polynesians, traveled to the islands on rafts in search of provisions, water, and a start of a new community. These people knew that they would never see their old home again since the nearest island was 1,600 miles away from Easter Island. They had to take as much of what they could the rafts.

The people started to build huge statues. They would make them as big as 20 feet tall. They used them to be praised as their gods. They were only powerful when white eyes where put in them. They language that they used to talk showed no relationship to any of the languages around them. The Polynesians would recite while playing a game almost like cat's cradle. The change in their language shows their isolation.

The language of the people also showed no bond to the islands around them. The people would chant while playing a game similar to the one we know as cat's cradle. Today we are able to use this song to found out more about there past. The change in their language shows their isolation to the rest of the world. As time past the people started to kill themseveles. They started to run out of tress, food, and other resoureces. The exponential growth is graphed in a J-shaped graph to show how the population increased and at the end decreased by a big number.

More summaries and resources for teaching or studying Easter Island.