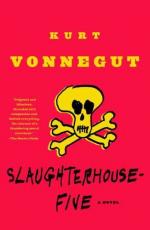 Get Antiwar Message in "Slaughterhouse-Five" from Amazon.com
View the Study Pack
View the Lesson Plans

Kurt Vonnegut
This student essay consists of approximately 3 pages of analysis of Antiwar Message in "Slaughterhouse-Five".

After the firebombing of Dresden, Vonnegut describes what remained of the town. The survivors of the bombing are to "climb over curve after curve on the face of the moon"(180). This comparison between the landscapes of Dresden to the moon shows that the war made him feel as though it was a different planet.

Vonnegut uses symbols to display his hatred for war Vonnegut uses the bird that says "Poo-tee-weet" (215) for a symbol of futility. This bird shows up at the very end after the massacre at Dresden. It seems to suggest that nothing that can be said after such an event will be the right thing to say. To fill the space Vonnegut uses the bird.

More summaries and resources for teaching or studying Slaughterhouse-Five.