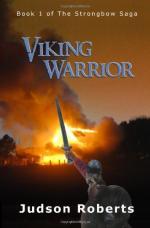 Get The Vikings from Amazon.com
View the Study Pack

This student essay consists of approximately 1 page of analysis of The Vikings.

Summary: Essay explains how the Vikings were a strange mixture of people because they were both savage and civilized.
The Vikings were a strange mixture, both savage and civilized. They were the skilled craftsmen that made the warships, people feared during 790 - 1100 CE. Although many people are usually reminded of their barbaric ways, they also had great accomplishment.

Not all Vikings were raiders. Most Vikings were farmers and traders; those who lived near the sea were fishers. Those who lived on isolated farms had to be carpenters and blacksmith as well as farmers. In addition they were also talented craftsmen. Raiding weren't a great part of the Viking society, only the boldest were apart of that barbaric world.

Most part the Vikings were clean people. They used double-sided combs to comb their hair and beards. Some of their homes even had outdoor lavatories. Although the Vikings were brutal at battles, they believed in being clean.

One of the Viking laws was they justified revenge, even if it...

More summaries and resources for teaching or studying Viking.

The Vikings from BookRags. (c)2020 BookRags, Inc. All rights reserved.