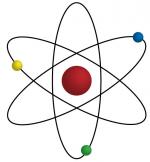 Get Atoms- Notes from Amazon.com
View the Study Pack

This student essay consists of approximately 2 pages of analysis of Atoms- Notes.

Aristotle- didn't believe in atoms, thought all matter was continuous.

Chemical reaction- transformation of substance(s) into one or more new substances.

Law of Conservation Of Mass- mass is neither destroyed nor created during ordinary chemical or physical reactions.

Law Of Definite Proportions- the fact that chemical compounds contain the same elements in exactly the same proportions by mass regardless of the size of the sample or source of the compound.

Law of Multiple Proportions- if two or more different compounds are composed of the same two elements, then the ratio of the masses of the second element combined with a certain mass of the first element is always a ratio of small whole numbers.

Dalton- proposed the 5 major points of the Atomic Theory.

More summaries and resources for teaching or studying Atom.