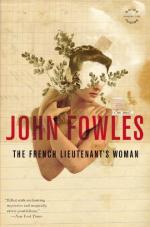 Get Legal Aspects of "The French Lieutenant's Woman" from Amazon.com
View the Study Pack
View the Lesson Plans

John Fowles
This student essay consists of approximately 3 pages of analysis of Legal Aspects of "The French Lieutenant's Woman".

Summary: Essay describes the legal aspects of the novel "The French Lieutenant's Woman" by John Fowles.

The French Lieutenant's Woman is a novel which takes place in England in the Mid-Victorian period (1867). This story is about Charles Smithson, a discontented bachelor who had an affair with a prostitute named Sarah Woodruff (a lady's companion and former governess). As a result of his affair with Sarah, Charles breaks his engagement to Ernestina Freeman. After breaking his engagement he learns of the disappearance of Sarah and hires detectives to find her. Meanwhile Mr. Freeman, father of Ernestina threatens to file a suit against Charles for breech of promise of marriage. Charles receives a hand delivered letter requesting his presence at the chambers of The Inns of Court and failure to attend would acknowledge the client's (Mr. Freeman) right to proceed to court. Upon his arrival at chambers Charles is presented with a statement of guilt. The most humiliating experience Charles undergoes is having to sign the...