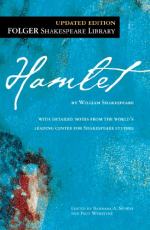 Get Fortinbras: the Counterpart of Hamlet from Amazon.com
View the Study Pack
View the Lesson Plans
Related Topics
William Shakespeare
The Winter's Tale
Venus and Adonis

William Shakespeare
This student essay consists of approximately 3 pages of analysis of Fortinbras.

Fortinbras: the Counterpart of Hamlet

Summary: This is an essay that compares the characters of Hamlet and Prince Fortinbras in the play "Hamlet" by William Shakespeare. Also discusses how they contrast each other and how Hamlet's weakness is exposed.

Throughout the play Hamlet can be compared to Fortinbras through their circumstances. Hamlet is the son of the slain king of Denmark. He has to avenge his father's death and also has to...

Fortinbras: the Counterpart of Hamlet from BookRags. (c)2021 BookRags, Inc. All rights reserved.