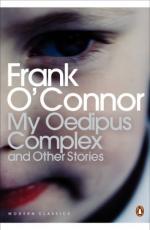 Get My Oedipus Complex from Amazon.com
View the Study Pack

This student essay consists of approximately 3 pages of analysis of My Oedipus Complex.

Summary: This essay shows how humor plays an important part in the story and explains how its makes an important contribution to the readers enjoyment of the text as a whole.
In Greek mythology Oedipus was a prince who was destined to kill his father and marry his mother, and he fulfilled this destiny unintentionally. In psychology, the Oedipus Complex is where a child is attracted to the parent of the opposite sex and openly resents the other parent, usually when the child is between the ages of three and five.

This choice of title misleads the reader to assume that they will be reading a dark, disturbing story - where actually the story is quite the opposite. It's a humorous story of a father and son and their jealousy of each others relationship with the mother.

The story is about an only child, Larry, whose father is away fighting in World War One, when the father returns the boy finds he now has to compete with the father for the attention and affections of the mother.

More summaries and resources for teaching or studying My Oedipus Complex.