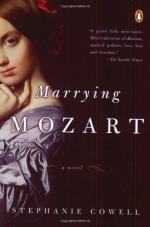 Get Mozart from Amazon.com
View the Study Pack
View the Lesson Plans

Peter Shaffer
This student essay consists of approximately 2 pages of analysis of Mozart.

Summary: Short essay on the life and accomplishments of Wolfgang Amadeus Mozart.
Do you know any musical geniuses? Would you take the chance at an open topic report to get to know one? Didn't think you would. But I did. On Wolfgang Amadeus Mozart. Considered to be the most greatest and most creative musical composer of all time. And I took the very boring task of bringing him from his time, to ours.

Mozart was born in Salzburg January 27, 1756. His father was leader of the local orchestra, so we he was born into a music orientated family. The musical genius showed his talent at a very early age. He was composing before most of us were in school. Mozart's musical skills opted his family to travel often, if it was to French and English royal families, or to other well-do-to families. Mozart was only 13 when he composed his first opera, two of them actually. Through 1777 the Mozart's traveled through Europe, looking for opportunities for young Wolfgang. He was offered a lowly job in Paris, where his mother died. Mozart had an arranged post set up for him back in Salzburg. He returned on a low note. A big job was offered to him. In years 1779 to 1780 he worked as an opera composer in Munich. Over the years Mozart made his living as a teacher, by publishing his music, playing for public or private residences, and by composing for commission. In 1782 he married Constanze Weber. By the time he died of a fever in 1791, he had composed more than 600 works and was only 36.

So that concludes a detailed, if all but brief, biography of Wolfgang Mozart. Despite all of his hard times, most of his music remained happy and cheerful. Ironic to most of the great artists we know, he liked jokes and puns and often laughed. His operas were often humorous and people enjoyed them.