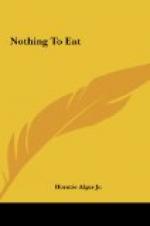 Get Nothing to Eat from Amazon.com
View the Study Pack

Nothing to Eat eBook

Horatio Alger, Jr.
This eBook from the Gutenberg Project consists of approximately 2 pages of information about Nothing to Eat.

Not by the Author of “Nothing to Wear.”

Though famine prevails not at all in the city;
Though none of starvation have died in the street;
Yet many there are now exciting our pity,
Who’re daily complaining of nothing to eat.

The every-day cry and the every-day fare,
That’s every day heard where the Livewells are dining,
Is nothing to eat, or else nothing to wear,
Which naked and starving rich Merdles are whining.

There’s Kitty Malone—­Mrs. Merdle ’tis now—­
Was ever on earth here before such a sinner;
Protesting, excusing and swearing a vow,
She’d nothing worth eating to give us for dinner.

Why Kitty, if starving for want of a meal,
And had’nt a cent in the world to buy meat,
You wouldn’t exclaim with a more pious zeal,
“I’m dying of hunger—­we’ve nothing to eat!!”

The Proof—­the Queen of Fashion

The point I advance, if it need confirmation,
I’ll prove by a witness that few will dispute,
A pink of perfection and truth in the naion
Where fashion and folly are all of a suit.

’Tis “Merdle the banker”—­or rather his wife,
Whose fashion, religion, or music, or dress,
Is followed, consulted, by many through life,
As pilots are followed by ships in distress;
For money’s a pilot, a master, a king,
Which men follow blindly through quicksands and shoals,
Where pilots their ships in a moment might fling
To destruction the vessel and cargo and souls.

’Twas money made Kitty of fashion the queen,
And fortune oft lends queens the scepter;
So fortune and fashion with this one we’ve seen
Her money and fortune in fashion has kept her;
While slaves of the queen with her hoops rules the day,
Expanding their utmost extent of expansion,
And mandates of fashion most freely obey,
And would if it bid all their souls to extinction.

The Object aimed at.

But what “lady patron” as queen holds the sway;
Or sweeping, whose hoops in the street are most sweeping;
The burthen is not of this truth-telling lay,
That should in its reading the world set to weeping,
While telling the suff’rings from head to the feet,
Of poor human beings with nothing to eat.

What another Poet did.

Another expounder of life’s thorny mazes
Excited our pity at fortune’s hard fare,
And troubled the city’s most troublesome places,
While singing his ditty of “Nothing to Wear.”

“A tale worth the telling,"’ though I tell for the same,
Great objects of pity we see in the street,
“With nothing to wear, though a legion by name,
Is not to buy clothing, but something to eat.

How the Author sometimes Dines.

More summaries and resources for teaching or studying Nothing to Eat.

Nothing to Eat from Project Gutenberg. Public domain.