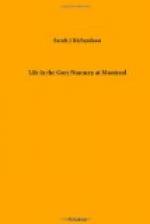 She arrived in this city August, 1854, and, as she has already stated, at once commenced seeking for employment.  She called at many houses before she found any one who wished for help; and her first question at each place was, “Are you a Catholic?” If the answer was in the affirmative, she passed on, but if the family were Protestants, she inquired for some kind of employment.  She did not care what it was; she would cook, wash, sew, or do chamber-work—­anything to earn her bread.  A Mr. Handy was the first person who took her in, and gave her a home.  In his family she worked for her board a few weeks, going out to wash occasionally as she had opportunity.  She then went to Holden Mass., but for some reason remained only one week, and again returned to Worcester.

Mr. Ezra Goddard then took her into his own family, and found her capable, industrious, and trustworthy.  Had anything been wanting to prove her truthfulness and sincerity, the deep gratitude of her fervent “I thank you,” when told that she had found a permanent home, would have done it effectually.  But though her whole appearance indicated contentment and earnestness of purpose, though her various duties were faithfully and zealously performed, yet the deep sadness of her countenance, and the evident anxiety of her mind at first awakened a suspicion of mental derangement.  She seemed restless, suspicious, and morbidly apprehensive of approaching danger.  The appearance of a stranger, or a sudden ringing of the bell, would cause her to start, tremble, and exhibit the greatest perturbation of spirit.  In fact, she seemed so constantly on the qui vive, the lady of the house one day said to her, “Sarah, what is the matter with you? what do you fear?” “The Roman Catholic priests,” she replied.  “I have been a nun.  I ran away from the Grey Nunnery at Montreal, and twice I have been caught, carried back, and punished in the most cruel manner.  O, if you knew what I have suffered, you would not wonder that I live in constant fear lest they again seek out my retreat; and I will die before I go back again.”

Further questioning drew from her the foregoing narrative, which she repeated once and again to various persons, and at different times, without the least alteration or contradiction.  She resided in the family of Mr. Goddard some weeks, when she was taken into the employ of Mr. Amos L. Black.

This gentleman informs us that he found her a faithful, industrious, honest servant, and he has not the least doubt of the truthfulness of her statements respecting her former life in the Convent.

A few weeks after this, she was married to Frederick S. Richardson with whom she became acquainted soon after her arrival in the city of Worcester.  The marriage ceremony was performed by Charles Chaffin, Esq., of Holden, Mass.  After their marriage, her husband hired a room in the house occupied by Mr. Handy with whom she had formerly resided.  After a few weeks, however, they removed to a place called the Drury farm.  It is owned by the heirs, but left in the care of Mr. Ezra Goddard.