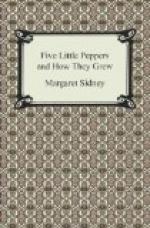 “Now all go back to your work,” said that functionary when he considered the staring and muttered admiration had been indulged in long enough, “and leave us.”

“I want you,” said his assistant, touching his elbow.

“Clear out,” said Jefferson angrily, his face turned quite from Phronsie.

But she caught the tone and immediately laid down the bit of dough she was moulding.

“Do go,” she begged, “and come back quickly,” smiling up into his face.  “See, I’m going to pat and pat and pat, oh! ever so much before you come back.”

So Jefferson followed the under cook, the scullery boy went back to cleaning the knives, Susan, the parlor maid who was going through the kitchen with her dustpan and broom, hurried off with a backward glance or two, and Phronsie was left quite alone to hum her way along in her blissful culinary attempt.

“Bless me!” exclaimed a voice close to her small ear, as she was attempting for the fifth time to roll out the paste quite as thin as she had seen Jefferson do, “what is this?  Bless my soul! it’s Phronsie!”

Phronsie set down the heavy rolling-pin and turned in her chair with a gleeful laugh.

“Dear, dear Grandpapa!” she cried, clasping her floury hands, “oh!  I’m so glad you’ve come to see me make a pie all by myself.  It’s for Polly, and it’s to be full of plums; Jefferson let me make it.”

“Jefferson?  And where is he, pray?” cried Mr. King irately.  “Pretty fellow, to bring you down to these apartments, and then go off and forget you.  Jefferson!” he called sharply, “here, where are you?”

“Oh, Grandpapa!” exclaimed Phronsie in dire distress, “I sent him; Jefferson didn’t want to go, Grandpapa dear, really and truly, he went because I asked him.”

“If you please, sir,” began Jefferson, hurrying up, “I only stepped off a bit to the cellar.  Bassett sent down a lot of turnips, they ain’t first-rate, and”—­

“All right,” said Mr. King, cutting him short with a wave of his hand, “if Miss Phronsie sent you off, it’s all right; I don’t want to hear any more elaborate explanations.”

“Little Miss hasn’t been alone but a few minutes,” said Jefferson in a worried way.

“And see,” said Phronsie, turning back to her efforts, while one hand grasped the old gentleman’s palm, “I’ve almost got it to look like Jefferson’s.  Almost, haven’t I?” she asked, regarding it anxiously.

“It will be the most beautiful pie,” cried Mr. King, a hearty enthusiasm succeeding his irritability, “that ever was baked.  I wish you’d make me one sometime, Phronsie.”

“Do you?” she cried in a tremor of delight, “and will you really have it on the table, and cut it with Aunt Whitney’s big silver knife?”

“That I will,” declared Mr. King solemnly.

“Then some day I’ll come down here again, Jefferson,” cried Phronsie in a transport, “and bake one for my dear Grandpapa.  That is, if this one is good.  Oh! you do suppose it will be good, don’t you?” appealingly at him.