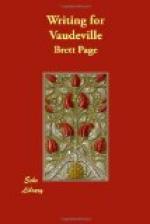 Get Writing for Vaudeville from Amazon.com
View the Study Pack

This eBook from the Gutenberg Project consists of approximately 543 pages of information about Writing for Vaudeville.

THE LARGER CIRCUITS AND BOOKING OFFICES

The following vaudeville circuits, while they may not maintain regular producing departments, produce acts every now and then.

To these markets nearly every booking agent and manager in the vaudeville business might be added.  Each one has a list of acts he handles that need new material from time to time.  And often the agent or manager will add to his list of clients by producing an exceptionally fine act himself.

The reason such a list is not given here is that it would require a small volume merely for the names and addresses.  Consultation of “The Clipper Red Book”—­a handy directory of theatrical agents, sold at ten cents—­will supply this information.  A knowledge of the special kinds of acts handled by each agent or manager, and the producers previously given as well, may be gathered by a careful reading of the various theatrical specialized journals.  This knowledge can only be acquired a bit here and a little there through persistent attention to the notices of new acts and announcements of plans.

More summaries and resources for teaching or studying Writing for Vaudeville.