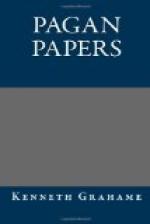 Get Pagan Papers from Amazon.com
View the Study Pack

Kenneth Grahame
This eBook from the Gutenberg Project consists of approximately 82 pages of information about Pagan Papers.

These Web sites include award-winning information about Project Gutenberg, including how to donate, how to help produce our new eBooks, and how to subscribe to our email newsletter (free!).

Those of you who want to download any eBook before announcement can get to them as follows, and just download by date.  This is also a good way to get them instantly upon announcement, as the indexes our cataloguers produce obviously take a while after an announcement goes out in the Project Gutenberg Newsletter.

Just search by the first five letters of the filename you want, as it appears in our Newsletters.

Information about Project Gutenberg (one page)

We produce about two million dollars for each hour we work.  The time it takes us, a rather conservative estimate, is fifty hours to get any eBook selected, entered, proofread, edited, copyright searched and analyzed, the copyright letters written, etc.  Our projected audience is one hundred million readers.  If the value per text is nominally estimated at one dollar then we produce $2 million dollars per hour in 2002 as we release over 100 new text files per month:  1240 more eBooks in 2001 for a total of 4000+ We are already on our way to trying for 2000 more eBooks in 2002 If they reach just 1-2% of the world’s population then the total will reach over half a trillion eBooks given away by year’s end.

The Goal of Project Gutenberg is to Give Away 1 Trillion eBooks!  This is ten thousand titles each to one hundred million readers, which is only about 4% of the present number of computer users.

Here is the briefest record of our progress (* means estimated):

We need your donations more than ever!

More summaries and resources for teaching or studying Pagan Papers.