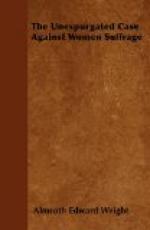 Get The Unexpurgated Case Against Woman Suffrage from Amazon.com
View the Study Pack

Almroth Wright
This eBook from the Gutenberg Project consists of approximately 94 pages of information about The Unexpurgated Case Against Woman Suffrage.

TO THE EDITOR OF THE TIMES

SIR,—­For man the physiological psychology of woman is full of difficulties.

He is not a little mystified when he encounters in her periodically recurring phases of hypersensitiveness, unreasonableness, and loss of the sense of proportion.

He is frankly perplexed when confronted with a complete alteration of character in a woman who is child-bearing.

When he is a witness of the “tendency of woman to morally warp when nervously ill,” and of the terrible physical havoc which the pangs of a disappointed love may work, he is appalled.

And it leaves on his mind an eerie feeling when he sees serious and long-continued mental disorders developing in connexion with the approaching extinction of a woman’s reproductive faculty.

No man can close his eyes to these things; but he does not feel at liberty to speak of them.

“For the woman that God gave him is not his to give away."[1]

[1 From “The Female of the Species” by Rudyard Kipling]

As for woman herself, she makes very light of any of these mental upsettings.

[1] In the interests of those who feel that female dignity is compromised by it, I have here omitted a woman’s flippant overestimate of the number of women in London society who suffer from nervous disorders at the climacteric [i.e. menopause].

None the less, these upsettings of her mental equilibrium are the things that a woman has most cause to fear; and no doctor can ever lose sight of the fact that the mind of woman is always threatened with danger from the reverberations of her physiological emergencies.

It is with such thoughts that the doctor lets his eyes rest upon the militant suffragist.  He cannot shut them to the fact that there is mixed up with the woman’s movement much mental disorder; and he cannot conceal from himself the physiological emergencies which lie behind.

The recruiting field for the militant suffragists is the million of our excess female population—­that million which had better long ago have gone out to mate with its complement of men beyond the sea.

Among them there are the following different types of women:—­

(a) First—­let us put them first—­come a class of women who hold, with minds otherwise unwarped, that they may, whenever it is to their advantage, lawfully resort to physical violence.

The programme, as distinguished from the methods, of these women is not very different from that of the ordinary suffragist woman.

(b) There file past next a class of women who have all their life-long been strangers to joy, women in whom instincts long suppressed have in the end broken into flame.  These are the sexually embittered women in whom everything has turned into gall and bitterness of heart, and hatred of men.

More summaries and resources for teaching or studying The Unexpurgated Case Against Woman Suffrage.