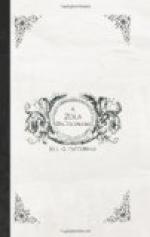 HUTIN, a salesman in the silk department of “The Ladies’ Paradise.”  “He had managed after eighteen months’ service to become one of the principal salesmen, thanks to a natural flexibility of character, a continual flow of caressing flattery under which was concealed a furious rage for business.”  Having conspired against Robineau, the “second hand” in his department, he succeeded him, only to be conspired against in turn by his own subordinates.  When Denise Baudu first came to “The Ladies’ Paradise” Hutin showed her some kindness, for which she was grateful, but ultimately he made statements about her which were entirely without foundation.  Au Bonheur des Dames.

HUTIN (MADAME), a woman who lived in the vicinity of the Halles Centrales, and was spied on by Mademoiselle Saget, whose penetrating eyes allowed none of her neighbours to escape notice.  Le Ventre de Paris.

ISABELLE, a character in La Petite Duchesse a piece by Fauchery, played at the Theatre des Varietes.  The part was taken by Simonne Cabiroche.  Nana.

JABOUILLE, an herbalist, whose shop was situated in Rue de Cherche-Midi.  He was a widower, and married for the second time a woman named Mathilde.  His shop was at one time prosperous, but business fell away until what was left was only that of an equivocal character.  He died of syncope induced by phthisis.  L’Oeuvre.

JABOUILLE (MADAME MATHILDE), wife of the preceding.  She was a woman of about thirty, plain-looking, and exceedingly thin.  From the time of her marriage to Jabouille, his business began to decrease, and this, it would appear, was due to her reputation, which alarmed the more respectable customers.  Her liaisons were numerous, and included Mahoudeau, Chaine, and Jory, but after the death of her husband she married the last named, settling down into respectability and ruling him with a rod of iron.  L’Oeuvre.

JACOBY, a Jew from Bordeaux, between whom and Mazaud there was keen rivalry.  “Though of great experience and shrewdness, he was sorely handicapped by his passion for speculation, and in spite of considerable profits always seemed on the eve of a catastrophe.  His money melted away on settling days.”  He acted as broker for Daigremont, and also for Gundermann.  The great gamble in the shares of the Universal Bank resolved itself into a duel between Jacoby and Mazaud, the one selling on behalf of Gundermann, and the other buying on behalf of Saccard; and the final catastrophe was hastened by Jacoby warning Daigremont of Gundermann’s determination to crush out the bank.  L’Argent.

JALAGUIER FILS, son of the preceding.  Madame Correur took an interest in him, and asked Eugene Rougon to secure a scholarship for him.  Son Excellence Eugene Rougon.