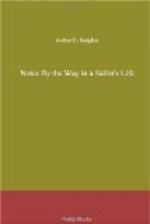 Get Notes By the Way in a Sailor's Life from Amazon.com
View the Study Pack

Notes By the Way in a Sailor's Life eBook

This eBook from the Gutenberg Project consists of approximately 44 pages of information about Notes By the Way in a Sailor's Life.

At the time that the ship “Northfleet” was rescuing the crew of the brig “Hebe,” the ship “Bombay,” belonging to the same owner, — Mr. Duncan Dunbar, — was on the side of the same storm, at about one hundred miles distance, and had the wind from just the opposite direction, but with much greater force, and came near being lost.

The “Bombay” had embarked some troops in Portsmouth for the Indian Mutiny, and was ordered to proceed to Queenstown in Ireland to take on board some two hundred more soldiers.

When the vessel got near the entrance of the harbour it was nightfall, and, the wind being unfavourable, when the pilot got on board, he recommended the captain to make everything easy for the night and enter the harbour next morning, when he expected the wind to be fair.  But during the night the wind increased and became a violent northeast gale, and the vessel was blown out of the Irish Channel into the Atlantic Ocean.  For some days the wind blew with hurricane force.  The ship lost some sails, and was at last carrying only a close-reefed main topsail and fore staysail.  The sea was mountainous and lashing the ship from all directions.  Then late in the day, to the dismay of all on board, the lee main topsail-sheet gave way, and the sail was flapping like thunder and lashing the mast and rigging most furiously.  The ship, now having nothing to steady her, was helplessly rolling in the trough of the sea, at the mercy of the waves, which threatened to engulf her, as they were breaking on board from every direction.  The deck-houses were washed away and the decks were filled with water, which began to find an entrance to the ’tween-decks, where the poor soldiers were battened down.  In this plight it was necessary to get the remnant of the topsail secure, and if possible get a new sail in its place, so as to steady the ship.  The second officer was ordered to get the sailors and do this, but he soon reported that the sailors, many of whom were foreigners, would not go aloft.  The chief officer then went forward and called for men, and asked if there were any British sailors among them.  If there were, for God’s sake, to go aloft with him.  He led, the way, followed by seventeen British sailors.  They had nearly completed the work of securing the sail when the ship gave a tremendous roll on the top of a very heavy wave and the mast went by the board, carrying with it the chief mate and his seventeen followers, and not a soul could be saved.  Oh, to think of the horrors of that dark and fearful night!

More summaries and resources for teaching or studying Notes By the Way in a Sailor's Life.

Notes By the Way in a Sailor's Life from Project Gutenberg. Public domain.