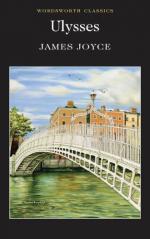 Get Ulysses from Amazon.com
View the Study Pack

James Joyce
This eBook from the Gutenberg Project consists of approximately 997 pages of information about Ulysses.

Stephen:  (Swaying) I don’t avoid it.  He provokes my intelligence.

Biddy the clap:  One immediately observes that he is of patrician lineage.

The virago:  Green above the red, says he.  Wolfe Tone.

The bawd:  The red’s as good as the green.  And better.  Up the soldiers!  Up
King Edward!

THE CITIZEN:  (WITH A HUGE EMERALD MUFFLER AND SHILLELAGH, CALLS)

May the God above
Send down a dove
With teeth as sharp as razors
To slit the throats
Of the English dogs
That hanged our Irish leaders.

THE CROPPY BOY:  (THE ROPENOOSE ROUND HIS NECK, GRIPES IN HIS ISSUING BOWELS WITH BOTH HANDS)

I bear no hate to a living thing,
But I love my country beyond the king.

Rumbold, demon barber:  (Accompanied by two BLACKMASKED assistants, advances with Gladstone bag which he opens) Ladies and gents, cleaver purchased by Mrs Pearcy to slay Mogg.  Knife with which Voisin dismembered the wife of a compatriot and hid remains in a sheet in the cellar, the unfortunate female’s throat being cut from ear to ear.  Phial containing arsenic retrieved from body of Miss Barron which sent Seddon to the gallows.

(He jerks the rope.  The assistants leap at the victim’s legs and drag him downward, grunting the croppy boy’s tongue protrudes violently.)

(He gives up the ghost. A violent erection of the hanged sends GOUTS of sperm spouting through his DEATHCLOTHES on to the cobblestones.  Mrs Bellingham, Mrs Yelverton Barry and the honourable Mrs Mervyn Talboys rush forward with their handkerchiefs to sop it up.)

Rumbold:  I’m near it myself. (He undoes the noose) Rope which hanged the awful rebel.  Ten shillings a time.  As applied to Her Royal Highness. (He plunges his head into the gaping belly of the hanged and draws out his head again clotted with coiled and smoking entrails) My painful duty has now been done.  God save the king!