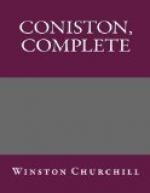 Get Coniston — Complete from Amazon.com
View the Study Pack

Winston Churchill
This eBook from the Gutenberg Project consists of approximately 650 pages of information about Coniston — Complete.

a proud Britain to her knees, and much of the warring in the book took color from Captain Timothy Prescott’s stories of General Stark and his campaigns, heard at Jonah Winch’s store.  What Paris looked like, or Berlin, or the Hospice of St. Bernard—­though imaged by a winter Coniston—­troubled Jethro not at all; the thing that stuck in his mind was that Napoleon—­for a considerable time, at least—­compelled men to do his bidding.  Constitutions crumble before the Strong.  Not that Jethro philosophized about constitutions.  Existing conditions presented themselves, and it occurred to him that there were crevices in the town system, and ways into power through the crevices for men clever enough to find them.

A week later, and in these same great woods on the way to Brampton, Cynthia overtook him once more.  It was characteristic of him that he plunged at once into the subject uppermost in his mind.

“A little island in the Mediterranean,” said Cynthia.

“I suppose you might call them so,” she said.  “They were poor, and lived out of the world.”

“Not at first;” she admitted; “but he had to move mountains later.  How far have you read?”

“One thing that helped him,” said Jethro, in indirect answer to this question, “he got a smart woman for his wife—­a smart woman.”

“Poor Josephine!” she said, “I always wish he had not cast her off.”

“After a while, when he got to be Emperor, he needed a wife who would be more useful to him.  Josephine had become a drag.  He cared more about getting on in the world than he did about his wife.”

“Wa-wahn’t the woman to blame any?” he said.

“Read the book, and you’ll see,” retorted Cynthia, flicking her horse, which started at all gaits down the road.  Jethro stood in his tracks, staring, but this time he did not see her face above the hood of the gig.  Presently he trudged on, head downward, pondering upon another problem than Napoleon’s.  Cynthia, at length, arrived in Brampton Street, in a humor that puzzled the good Miss Lucretia sorely.

More summaries and resources for teaching or studying Coniston Complete.