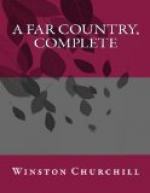 She could, at times, be surprisingly demure.  These impressions of her daintiness and demureness are particularly vivid in a picture my memory has retained of our walking together, unattended, to Susan Blackwood’s birthday party.  She must have been about twelve years old.  It was the first time I had escorted her or any other girl to a party; Mrs. Willett had smiled over the proceeding, but Nancy and I took it most seriously, as symbolic of things to come.  I can see Powell Street, where Nancy lived, at four o’clock on a mild and cloudy December afternoon, the decorous, retiring houses, Nancy on one side of the pavement by the iron fences and I on the other by the tree boxes.  I can’t remember her dress, only the exquisite sense of her slimness and daintiness comes back to me, of her dark hair in a long braid tied with a red ribbon, of her slender legs clad in black stockings of shining silk.  We felt the occasion to be somehow too significant, too eloquent for words....

In silence we climbed the flight of stone steps that led up to the Blackwood mansion, when suddenly the door was opened, letting out sounds of music and revelry.  Mr. Blackwood’s coloured butler, Ned, beamed at us hospitably, inviting us to enter the brightness within.  The shades were drawn, the carpets were covered with festal canvas, the folding doors between the square rooms were flung back, the prisms of the big chandeliers flung their light over animated groups of matrons and children.  Mrs. Watling, the mother of the Watling twins—­too young to be present was directing with vivacity the game of “King William was King James’s son,” and Mrs. McAlery was playing the piano.

Tom Peters, in a velvet suit and consequently very miserable, refused to embrace Ethel Hollister; while the scornful Julia lurked in a corner:  nothing would induce her to enter such a foolish game.  I experienced a novel discomfiture when Ralph kissed Nancy....  Afterwards came the feast, from which Ham Durrett, in a pink paper cap with streamers, was at length forcibly removed by his mother.  Thus early did he betray his love for the flesh pots....

It was not until I was sixteen that a player came and touched the keys of my soul, and it awoke, bewildered, at these first tender notes.  The music quickened, tripping in ecstasy, to change by subtle phrases into themes of exquisite suffering hitherto unexperienced.  I knew that I loved Nancy.

With the advent of longer dresses that reached to her shoe tops a change had come over her.  The tomboy, the willing camp-follower who loved me and was unashamed, were gone forever, and a mysterious, transfigured being, neither girl nor woman, had magically been evolved.  Could it be possible that she loved me still?  My complacency had vanished; suddenly I had become the aggressor, if only I had known how to “aggress”; but in her presence I was seized by an accursed shyness that paralyzed my tongue, and the things I had planned to say were left unuttered.  It was something—­though I did not realize it—­to be able to feel like that.