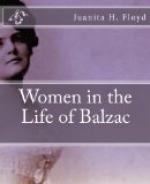 It was probably Madame Hanska’s sister Pauline, Madame Jean Riznitch, whose servants were to receive a reward from a rich moujik in case they could arrange to have him see Balzac.  This moujik was a great admirer of the novelist, had read all his books, burnt a candle to Saint Nicholas for him every week, and was anxious to meet him.  Since Madame Riznitch lived not far from Madame Hanska, he hoped to see Balzac when he visited Wierzschownia.

The relative whose association with Balzac seems to have caused Madame Hanska the most discomfort was her cousin, the Countess Marie Potocka.  He met her when he visited his Chatelaine in Geneva_, where the Countess Potocka entertained him, and after his return to Paris, he called on Madame Appony, wife of the Austrian ambassador, to deliver a letter for her.  Before going to Geneva he had heard of her, and had confused her identity with that of the belle Grecque who had died several years before.

He received a letter from her which he did not answer, for he wished to end this correspondence.  It is within the bounds of possibility that Balzac cared more for the Countess Potocka than he admitted to his “Polar Star,” but several years later, when she had become avaricious, he formed an aversion to her and warned Madame Hanska to beware of her cousin.

“I live by my friendships only.”

Many people write their romances, others live them; Honore de Balzac did both.  This life so full of romantic fiction mingled with stern reality, where the burden of debt is counter-balanced by dramatic passion, where hallucination can scarcely be distinguished from fact, where the weary traveler is ever seeking gold, rest, or love, ever longing to be famous and to be loved, where the hero, secluded as in a monastery, suddenly emerges to attend an opera, dressed in the most gaudy attire, where he lacks many of the comforts of life, yet suddenly crosses half the continent, allured by the fascinations of a woman, this life is indeed a roman balzacien par excellence!