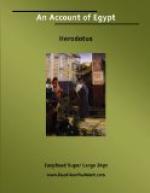 Get An Account of Egypt from Amazon.com
View the Study Pack

Herodotus
This eBook from the Gutenberg Project consists of approximately 130 pages of information about An Account of Egypt.

But, above all, he is the father of story-tellers.  “Herodotus is such simple and delightful reading,” says Jevons; “he is so unaffected and entertaining, his story flows so naturally and with such ease that we have a difficulty in bearing in mind that, over and above the hard writing which goes to make easy reading there is a perpetual marvel in the work of Herodotus.  It is the first artistic work in prose that Greek literature produced.  This prose work, which for pure literary merit no subsequent work has surpassed, than which later generations, after using the pen for centuries, have produced no prose more easy or more readable, this was the first of histories and of literary prose.”

BEING THE SECOND BOOK OF HIS HISTORIES CALLED EUTERPE

When Cyrus had brought his life to an end, Cambyses received the royal power in succession, being the son of Cyrus and of Cassandane the daughter of Pharnaspes, for whose death, which came about before his own, Cyrus had made great mourning himself and also had proclaimed to all those over whom he bore rule that they should make mourning for her:  Cambyses, I say, being the son of this woman and of Cyrus, regarded the Ionians and Aiolians as slaves inherited from his father; and he proceeded to march an army against Egypt, taking with him as helpers not only other nations of which he was ruler, but also those of the Hellenes over whom he had power besides.

Now the Egyptians, before the time when Psammetichos became king over them, were wont to suppose that they had come into being first of all men; but since the time when Psammetichos having become king desired to know what men had come into being first, they suppose that the Phrygians came into being before themselves, but they themselves before all other men.  Now Psammetichos, when he was not able by inquiry to find out any means of knowing who had come into being first of all men, contrived a device of the following kind:—­Taking two newborn children belonging to persons of the common sort he gave them to a shepherd to bring up at the place where his flocks were, with a manner of bringing up such as I shall say, charging him namely that no man should utter any word in their presence, and that they should be placed by themselves in a room where none might come, and at the proper time he should bring them she-goats, and when he had satisfied them with milk he should do for them whatever else was needed.  These things Psammetichos did and gave him this charge wishing to hear what word the children would let break forth first after they had ceased from wailings without sense.  And accordingly it came to pass; for after a space of two years had gone by, during which the shepherd went on acting so, at length, when he opened the door and entered, both children fell before him

More summaries and resources for teaching or studying An Account of Egypt.

An Account of Egypt from Project Gutenberg. Public domain.