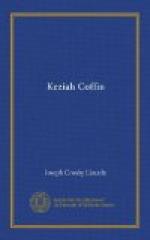 Get Keziah Coffin from Amazon.com
View the Study Pack

This eBook from the Gutenberg Project consists of approximately 426 pages of information about Keziah Coffin.

She was on her knees, her calico dress sleeves, patched and darned, but absolutely clean, rolled back, uncovering a pair of plump, strong arms, a saucer of tacks before her, and a tack hammer with a claw head in her hand.  She was taking up the carpet.  Grace Van Horne, Captain Eben Hammond’s ward, who had called to see if there was anything she might do to help, was removing towels, tablecloths, and the like from the drawers in a tall “high-boy,” folding them and placing them in an old and battered trunk.  The pair had been discussing the subject which all Trumet had discussed for three weeks, namely, the “calling” to the pastorate of the “Regular” church of the Rev. John Ellery, the young divinity student, who was to take the place of old Parson Langley, minister in the parish for over thirty years.  Discussion in the village had now reached a critical point, for the Reverend John was expected by almost any coach.  In those days, the days of the late fifties, the railroad down the Cape extended only as far as Sandwich; passengers made the rest of their journey by stage.  Many came direct from the city by the packet, the little schooner, but Mr. Ellery had written that he should probably come on the coach.

“They say he’s very nice-looking,” remarked Miss Van Horne soberly, but with a mischievous glance under her dark lashes at Keziah.  The lady addressed paused long enough to transfer several tacks from the floor to the saucer, and then made answer.

“Humph!” she observed.  “A good many years ago I saw a theater show up to Boston.  Don’t be shocked; those circumstances we hear so much tell of—­the kind you can’t control—­have kept me from goin’ to theaters much, even if I wanted to.  But I did see this entertainment, and a fool one ‘twas, too, all singin’ instead of talkin’—­op’ra, I believe they called it.  Well, as I started to say, one of the leadin’ folks in it was the Old Harry himself, and he was pretty good-lookin’.”

Grace laughed, even though she had been somewhat shocked.

“Why, Aunt Keziah!” she exclaimed—­those who knew Keziah Coffin best usually called her aunt, though real nephews and nieces she had none—­“why, Aunt Keziah!  What do you mean by comparing the—­the person you just mentioned with a minister!”

“Oh, I wasn’t comparin’ ’em; I’ll leave that for you Come-Outers to do.  Drat this carpet!  Seems’s if I never saw such long tacks; I do believe whoever put ’em down drove ’em clean through the center of the earth and let the Chinymen clinch ’em on t’other side.  I haul up a chunk of the cellar floor with every one.  Ah, hum!” with a sigh, “I cal’late they ain’t any more anxious to leave home than I am.  But, far’s the minister’s concerned, didn’t I hear of your Uncle Eben sayin’ in prayer meetin’ only a fortni’t or so ago that all hands who wa’n’t Come-Outers were own children to Satan?  Mr. Ellery must take after his father some.  Surprisin’, ain’t it, what a family the old critter’s got.”

More summaries and resources for teaching or studying Keziah Coffin.