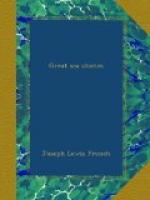 The current had by this time brought them abreast of the bay of Higuerote.  As they ran inward, all eyes were strained greedily to find some opening in the mangrove belt:  but none was to be seen for some time.  The lead was kept going; and every fresh heave announced shallower water.

“We shall have very shoal work of those mangroves, Yeo,” said Amyas; “I doubt whether we shall do aught now, unless we find a river’s mouth.”

“If the Lord thinks a river good for us, sir, he’ll show us one.”  So on they went, keeping a southeast course, and at last an opening in the mangrove belt was hailed with a cheer from the older hands, though the majority shrugged their shoulders, as men going open-eyed to destruction.

Of the mouth they sent in Drew and Cary with a boat, and watched anxiously for an hour.  The boat returned with a good report of two fathoms of water over the bar, impenetrable forests for two miles up, the river sixty yards broad, and no sign of man.  The river’s banks were soft and sloping mud, fit for careening.

“Safe quarters, sir,” said Yeo, privately, “as far as Spaniards go.  I hope in God it may be as safe from fevers.”

“Beggars must not be choosers,” said Amyas.  So in they went.

They towed the ship up about half-a-mile to a point where she could not be seen from the seaward; and there moored her to the mangrove-stems.  Amyas ordered a boat out, and went up the river himself to reconnoiter.  He rowed some three miles, till the river narrowed suddenly, and was all but covered in by the interlacing boughs of mighty trees.  There was no sign that man had been there since the making of the world.

He dropped down the stream again, thoughtfully and sadly.  How many years ago was it that he had passed this river’s mouth?  Three days.  And yet how much had passed in them!  Don Guzman found and lost—­Rose found and lost—­a great victory gained, and yet lost—­perhaps his ship lost—­above all, his brother lost.

Lost!  O God, how should he find his brother?

Some strange bird out of the woods made mournful answer—­“Never, never, never!”

How should he face his mother?

The night mist began to steam and wreath upon the foul beer-colored stream.  The loathy floor of liquid mud lay bare beneath the mangrove forest.  Upon the endless web of interarching roots great purple crabs were crawling up and down.  They would have supped with pleasure upon Amyas’s corpse; perhaps they might sup on him after all; for a heavy sickening graveyard smell made his heart sink within him, and his stomach heave; and his weary body, and more weary soul, gave themselves up helplessly to the depressing influence of that doleful place.  The black bank of dingy leathern leaves above his head, the endless labyrinth of stems and withes (for