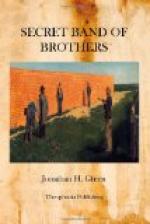 victim against whom his fury is directed.  The lawyer unscrupulously pockets a fee, which he knows has been obtained by the plunder of the citizen.  Not a few of them hang about our jails, prying into the means of the prisoners, and divide with them the spoil, sheltering themselves from communicating any disclosures they make under their judicial privileges.  But if justice be the end of the law, why should the communications of a prisoner to his counsel be held sacred?  If the case be undefensible otherwise, why should it be defended, unless it be to give a fee to the lawyer, at the expense of justice?  With all deference to the legislators of our country, and to the gentlemen of the legal profession, this seems a privilege not to be envied:  to know that you are assisting to defraud, but debarred by custom from disclosing it; to know that the culprit is guilty, and deserves punishment or restraint, but to send him forth again upon society to commit further crime.

Our readers may be anxious to know what became of the other two brothers, the fourth and fifth.  At this moment we believe they are both in the State Prison.  Now how was the ruin of this once respectable family accomplished?  Why did the fate of the elder not deter the younger from crime?  Were they merely drawn along by the contagion of ill-example, or were there more potent influences at work in their destruction?  And why did punishment and penitentiaries do so little in their reformation?  The greater part of their lives were passed within their walls, cut off from the influence of evil, but we see no sanitory effect.  We will not answer these questions directly, but in the course of this work will supply the reader with materials to answer them for himself.  We have every reason to believe that the eldest and the second were entangled in the meshes of The Secret Band of Brothers, in a manner from which there was no escape.  They are ever on the look-out for any individual who has forfeited his character, and who promises by his ingenuity or dexterity to be a fit tool for their purposes.  Their agents are to be found in all the professions, in the magistracy, and in the prisons and penitentiaries; sometimes, under the vail of hypocrisy, assuming a fair exterior at the time they are engaged in all manner of villany; at other times, when their influence in any place is in the ascendency, openly showing their real character.  Men can be found in many of our towns so notoriously profligate, that not one individual in the place could be found that would say they were honest men, yet through solicitation, party spirit, and sometimes through fear, they are elected to official stations.  It is one of the leading objects of the Secret Band, to have as many of the brotherhood in the magistracy as possible, and neither money nor importunity are spared to effect their object.  They know what they are about:  they are too sagacious to suppose that a thief will catch a thief; that a gambler will suppress gambling, or a drunkard promote temperance; and it would be well that those who really desire any of these objects, were equally “wise in their generation.”