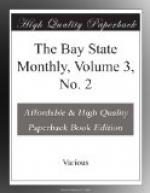 Get The Bay State Monthly, Volume 3, No. 2 from Amazon.com
View the Study Pack

This eBook from the Gutenberg Project consists of approximately 145 pages of information about The Bay State Monthly, Volume 3, No. 2.

A ROMANCE OF COLONIAL DAYS.

By Frances C. Sparhawk, Author of “A Lazy Man’s Work.”

At dinner Elizabeth was between Sir Temple Dacre and Major Vaughan.  The former devoted himself especially to her.  Opposite sat Katie, Lord Bulchester on one hand, while on the other was placed the guest last arrived, the one whose coming had been doubtful because it had not been certain that he would reach the city in time to accept his invitation.  Lord Bulchester so far forgot his manners as to pay very little attention to the pretty young lady who had been assigned to him; his thoughts were all for Katie Archdale, his ears were for her, and his eyes, except for the defiant glances which shot past her at Kenelm Waldo, this last arrival, to whom had fallen the place on her other hand.  Katie’s air of pensiveness as she took her seat seemed to her aunt suitable and very becoming.  But it was impossible to the girl’s nature not to enjoy the situation, and the smile that often lurked slyly in the depths of her dimples and brought a light beneath the grave droop of her eyelids made her only the handsomer.  Her dress of white India muslin was simple and beautiful; it heightened the effect of her gravity of demeanor, and by making her seem even more youthful than she was, softened any expression of enjoyment that flashed across her pensiveness.  Elizabeth in her brocade thought how little the girl needed ornament.  Edmonson, watching the high-bred air of the latter, her attentiveness and tact where she used to be dreamy, her face full of indications of strength and refinement, felt that in ten years, when Katie’s attractions had waned, Elizabeth would have an added charm of presence, and an added power.  He admired intellect, although he so readily adapted himself to people with tastes, and pursuits differing from intellectual, and secretly he had his ambitions.  When he should marry well, as he intended to do, the wealth thus gained would give him the place to which his birth entitled him, and then he looked forward to political eminence.  Supposing, only supposing, that one day he should be premier he mused, studying Elizabeth,—­stranger things had happened—­what a help a wife like this would be to him; her pride, her self-control, her graciousness, her wit would then come into play excellently.  She belonged to him by right, and——.  Again there came that ominous flash in his eyes as they turned furtively in another direction, and the shadow that lurked in his heart leaped forward again and clutched at its victim.  Then Edmonson turned with a smile to Colonel Pepperell beside him, and asked some further particulars about the hostility of the Indian tribes.

More summaries and resources for teaching or studying The Bay State Monthly, Volume 3, No. 2.