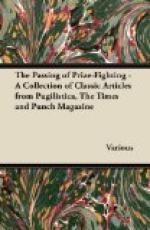 We are virtuously happy to announce that a meeting has been held at the Hum-mums Hotel, Colonel Sibthorp in the chair, for the purpose of presenting to PUNCH some testimonial of public esteem for his exertions in the detection and exposure of fraudulent wits and would-be distinguished characters.

COLONEL SIBTHORP thanked the meeting for the honour they had conferred upon him in electing him their chairman upon this occasion.  None knew better than himself the service that PUNCH had rendered to the public.  But for that fun fed individual his (Col.  Sibthorp’s) own brilliant effusions would have been left to have smouldered in his brain, or have hung like cobwebs about the House of Commons. (Hear, hear!) But PUNCH had stepped in to the rescue; he had not only preserved some of the brilliant things that he (Col.  Sibthorp) had said, but had also reported many of the extremely original witticisms that he had intended to have uttered. (Hear!) There were many honourable gentlemen—­(he begged pardon—­gentlemen, he meant, without the honourable; but he had been so long a member of parliament that he had acquired a habit of calling men and things out of their proper names).  Apologising for so lengthy a parenthesis, he would say that there were many gentlemen who were equally indebted (hear! from Sir Peter Laurie, Peter Borthwick, and Pre-Adam Roebuck) to this jocular benefactor.  “It was PUNCH,” said the gallant gentleman, with much feeling, “who first convinced me that the popular opinion of my asinine capabilities was erroneous.  It was PUNCH who discovered that there was as much in my head as on it(loud cheers, produced doubtlessly by the aptness of the simile, the gallant Colonel being perfectly bald).  I should, therefore, be the most ungrateful of Members for Lincoln, did I not entreat of this meeting to mark their high sense of Mr. PUNCH’S exertions by a liberal subscription” (cheers).

SIR PETER LAURIE acknowledged himself equally in debt with their gallant Chairman to the object of the present meeting.  He (Sir Peter) had tried all schemes to obtain popularity—­he had made speeches without number or meaning—­he had done double duty at the Mansion-house, and had made Mr. Hobler laugh more heartily than any Lord Mayor or Alderman since the days of Whittington (during whose mayoralty the venerable Chief Clerk first took office)—­he (Sir P. Laurie) had, after much difficulty and four years’ practice, received the Queen on horseback (much cheering); but (continued cheering)—­but it was left for PUNCH to achieve his immortality (immense cheering—­several squares of glass in the conservatory opposite broken by the explosion).  He (Sir P. Laurie) had done all in his power to deserve the notice of that illustrious wooden individual.  He had endeavoured to be much more ass—­(loud cheers)—­iduous than ever.  PUNCH had rewarded him; and he therefore felt it his bounden duty to reward PUNCH. (Hear! hear!)