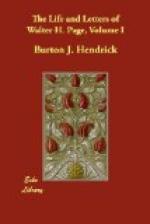 Get The Life and Letters of Walter H. Page, Volume I from Amazon.com
View the Study Pack

The Life and Letters of Walter H. Page, Volume I eBook

Burton J. Hendrick
This eBook from the Gutenberg Project consists of approximately 482 pages of information about The Life and Letters of Walter H. Page, Volume I.

is not clear, but the Germans, with characteristic stupidity, prevented the American from having a fair chance.  The Berlin Foreign Office at once cabled to Count Bernstorff and Bernhard Dernburg—­the latter a bovine publicity agent who was then promoting the German cause in the American press—­with instructions to start a “propaganda” in behalf of the “freedom of the seas.”  By the time Colonel House reached London, therefore, these four words had been adorned with the Germanic label.  British statesmen regarded the suggestion as coming from Germany and not from America, and the reception was worse than cold.

And another tragedy now roughly interrupted President Wilson’s attempts at mediation.  Page’s letters have disclosed that he possessed almost a clairvoyant faculty of foreseeing approaching events.  The letters of the latter part of April and of early May contain many forebodings of tragedy.  “Peace?  Lord knows when!” he writes to his son Arthur on May 2nd.  “The blowing up of a liner with American passengers may be the prelude.  I almost expect such a thing.”  And again on the same date:  “If a British liner full of American passengers be blown up, what will Uncle Sam do?  That’s what’s going to happen.”  “We all have the feeling here,” the Ambassador writes on May 6th, “that more and more frightful things are about to happen.”

The ink on those words was scarcely dry when a message from Queenstown was handed to the American Ambassador.  A German submarine had torpedoed and sunk the Lusitania off the Old head of Kinsale, and one hundred and twenty-four American men, women, and children had been drowned.

[Footnote 100:  On September 5, 1914, Great Britain, France, and Russia signed the Pact of London, an agreement which bound the three powers of the Entente to make war and peace as a unit.  Each power specifically pledged itself not to make a separate peace.]

[Footnote 103:  Ambassador from Austria-Hungary to the United States.]

[Footnote 104:  This, with certain modifications is Article 10 of the Covenant of the League of Nations.]

[Footnote 105:  There is a suggestion of these provisions in Article 8 of the League Covenant.]

[Footnote 106:  Article 11 of the League Covenant reflects the influence of this idea.]

[Footnote 107:  From the President’s second message to Congress, December 8, 1914:  “It is our dearest present hope that this character and reputation may presently, in God’s providence, bring us an opportunity, such as has seldom been vouchsafed any nation, to counsel and obtain peace in the world and reconciliation and a healing settlement of many a matter that has cooled and interrupted the friendship of nations.”]

More summaries and resources for teaching or studying The Life and Letters of Walter H. Page, Volume I.

The Life and Letters of Walter H. Page, Volume I from Project Gutenberg. Public domain.