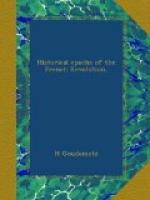 The following sheets contain a journal of principal events of the French Revolution.  The best authorities have been resorted to, and the facts are related without any comment.  The reader will find a faithful outline of an interesting and momentous period of history, and will see how naturally each error produced its corresponding misfortune.

Various causes contributed to effect a revolution in the minds of Frenchmen, and led the way to a revolution in the state.  The arbitrary nature of the government had been long submitted to, and perhaps would have continued so much longer, if France had not taken part in the American war.

The perfidious policy of Vergennes, who, with a view of humbling the pride of England, assisted the subject in arms against his Sovereign, soon imported into his own nation the seeds of liberty, which it had helped to cultivate in a country of rebellion; and the crown of France, as I once heard it emphatically observed, was lost in the plains of America.  The soldier returned to Europe with new doctrines instead of new discipline, and the army in general soon grew dissatisfied with the Monarch, on account of unusual, and, as they thought, ignominious rigours which were introduced into it from the military school of Germany.  The King also, from a necessity of retrenchment, had induced his ministers to adopt some mistaken measures of economy respecting the troops, and thus increased the odium which pride had fostered, and by diminishing the splendour of the crown, stripped it of its security and protection.

To this was added the wanton profusion of the Court in other expenses, and the external parade and brilliancy, which, if they impoverish, often dazzle and gratify the people, was exchanged for familiar entertainments, which gave rise to frequent jealousies among the nobles, and tended to lower that sense of awe and respect for royalty among the people, which in monarchies it is of the utmost importance to preserve.

At this time, also, philosophical discussion had reached its pinnacle of boldness.  Infidelity had woven the web of discord in the human mind, which was now ripe for experiment, and Rousseau and Voltaire were the favourite authors.

Previous to the year 1789, from the extreme disorder of the finances, it became necessary to raise money by extraordinary taxes, which the common powers of the parliament were deemed insufficient to authorize; and afraid, in the present temper of the people, to impose upon them unusual burthens, ministers looked with solicitude for some other sanctions.

Monsieur de Calonne was unwilling to adopt so dangerous an expedient as that of assembling the states-general; [Footnote:  An Assembly consisting of deputies from the three orders of citizens in France, namely, the clergy, the nobility, and the tiers-etat; which last included every French citizen who was not of the clergy or nobility.] he therefore adopted the expedient of summoning an assembly of notables, or eminent persons, chosen by the King from the different parts of the kingdom.