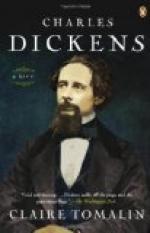 Get Life of Charles Dickens from Amazon.com
View the Study Pack

This eBook from the Gutenberg Project consists of approximately 214 pages of information about Life of Charles Dickens.

Change for the American Notes; or, Letters from London to New York.  By an American Lady.  London, 1843, 8vo.

Published in The Puppet Showman’s Album.  Illustrated by
Gavarni.

“Christmas Eve” with the Spirits ... with some further tidings of the Lives of Scrooge and Tiny Tim.  London, 1870.

A Christmas Carol:  being a few scattered staves, from a familiar composition, re-arranged for performance, by a distinguished Musical Amateur, during the holiday season, at H—­rw—­rd—­n.  With four illustrations by Harry Furness.

Dombey and Son Finished:  a burlesque.  Illustrated by Albert Smith.

Condensed Novels, and Other Papers. By F. Bret Harte.

The Cloven Foot:  being an adaptation of the English novel, “The Mystery of Edwin Drood” to American scenes, characters, customs, and nomenclature.  By Orpheus C. Kerr.  New York, 1870, 8vo.

More summaries and resources for teaching or studying Life of Charles Dickens.