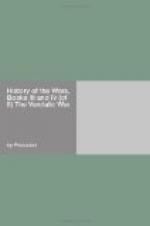 Get History of the Wars, Books III and IV (of 8) from Amazon.com
View the Study Pack

History of the Wars, Books III and IV (of 8) eBook

Procopius
This eBook from the Gutenberg Project consists of approximately 285 pages of information about History of the Wars, Books III and IV (of 8).

to Libya.  And they established numerous cities and took possession of the whole of Libya as far as the Pillars of Heracles, and there they have lived even up to my time, using the Phoenician tongue.  They also built a fortress in Numidia, where now is the city called Tigisis.  In that place are two columns made of white stone near by the great spring, having Phoenician letters cut in them which say in the Phoenician tongue:  “We are they who fled from before the face of Joshua, the robber, the son of Nun.”  There were also other nations settled in Libya before the Moors, who on account of having been established there from of old were said to be children of the soil.  And because of this they said that Antaeus, their king, who wrestled with Heracles in Clipea,[34] was a son of the earth.  And in later times those who removed from Phoenicia with Dido came to the inhabitants of Libya as to kinsmen.  And they willingly allowed them to found and hold Carthage.  But as time went on Carthage became a powerful and populous city.  And a battle took place between them and their neighbours, who, as has been said, had come from Palestine before them and are called Moors at the present time, and the Carthaginians defeated them and compelled them to live a very great distance away from Carthage.  Later on the Romans gained the supremacy over all of them in war, and settled the Moors at the extremity of the inhabited land of Libya, and made the Carthaginians and the other Libyans subject and tributary to themselves.  And after this the Moors won many victories over the Vandals and gained possession of the land now called Mauretania, extending from Gadira as far as the boundaries of Caesarea,[35] as well as the most of Libya which remained.  Such, then, is the story of the settlement of the Moors in Libya.

Now when Solomon heard what had befallen Rufinus and Aigan, he made ready for war and wrote as follows to the commanders of the Moors:  “Other men than you have even before this had the ill fortune to lose their senses and to be destroyed, men who had no means of judging beforehand how their folly would turn out.  But as for you, who have the example near at hand in your neighbours, the Vandals, what in the world has happened to you that you have decided to raise your hands against the great emperor and throw away your own security, and that too when you have given the most dread oaths in writing and have handed over your children as pledges to the agreement?  Is it that you have determined to make a kind of display of the fact that you have no consideration either for God or for good faith or for kinship itself or for safety or for any other thing at all?  And yet, if such is your practice in matters which concern the divine, in what ally do you put your trust in marching against the emperor of the Romans?  And if you are taking the field to the destruction of your children, what in the world is it in behalf of which you have decided to endanger yourselves?  But if any repentance has by now entered your hearts for what has already taken place, write to us, that we may satisfactorily arrange with you touching what has already been done; but if your madness has not yet abated, expect a Roman war, which will come upon you together with the oaths which you have violated and the wrong which you are doing to your own children.”

More summaries and resources for teaching or studying History of the Wars, Books III and IV (of 8).

History of the Wars, Books III and IV (of 8) from Project Gutenberg. Public domain.