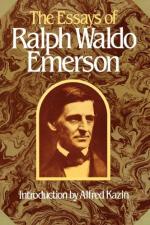 Get Essays by Ralph Waldo Emerson from Amazon.com
View the Study Pack

Our strength grows out of our weakness.  The indignation which arms itself with secret forces does not awaken until we are pricked and stung and sorely assailed.  A great man is always willing to be little.  Whilst he sits on the cushion of advantages, he goes to sleep.  When he is punished, tormented, defeated, he has a chance to learn something; he has been put on his wits, on his manhood; he has gained facts; learns his ignorance; is cured of the insanity of conceit; has got moderation and real skill.  The wise man throws himself on the side of his assailants.  It is more his interest than it is theirs to find his weak point.  The wound cicatrizes and falls off from him like a dead skin, and when they would triumph, lo! he has passed on invulnerable.  Blame is safer than praise.  I hate to be defended in a newspaper.  As long as all that is said is said against me, I feel a certain assurance of success.  But as soon as honeyed words of praise are spoken for me, I feel as one that lies unprotected before his enemies.  In general, every evil to which we do not succumb is a benefactor.  As the Sandwich Islander believes that the strength and valor of the enemy he kills passes into himself, so we gain the strength of the temptation we resist.

The same guards which protect us from disaster, defect, and enmity, defend us, if we will, from selfishness and fraud.  Bolts and bars are not the best of our institutions, nor is shrewdness in trade a mark of wisdom.  Men suffer all their life long, under the foolish superstition that they can be cheated.  But it is as impossible for a man to be cheated by anyone but himself,[137] as for a thing to be and not to be at the same time.  There is a third silent party to all our bargains.  The nature and soul of things takes on itself the guaranty of the fulfillment of every contract, so that honest service cannot come to loss.  If you serve an ungrateful master, serve him the more.  Put God in your debt.  Every stroke shall be repaid.  The longer the payment is withholden,[138] the better for you; for compound interest on compound interest is the rate and usage of this exchequer.

The history of persecution is a history of endeavors to cheat nature, to make water run up hill, to twist a rope of sand.  It makes no difference whether the actors be many or one, a tyrant or a mob.  A mob[139] is a society of bodies voluntarily bereaving themselves of reason, and traversing its work.  The mob is man voluntarily descending to the nature of the beast.  Its fit hour of activity is night.  Its actions are insane like its whole constitution; it persecutes a principle; it would whip a right; it would tar and feather justice, by inflicting fire and outrage upon the houses and persons of those who have these.  It resembles the prank of boys, who run with fire engines to put out the ruddy aurora streaming to the stars.  The inviolate spirit turns their spite against the wrongdoers.  The martyr cannot be dishonored.  Every lash inflicted is a tongue of fame; every prison, a more illustrious abode; every burned book or house enlightens the world; every suppressed or expunged word reverberates through the earth from side to side.  Hours of sanity and consideration are always arriving to communities, as to individuals, when the truth is seen, and the martyrs are justified.

More summaries and resources for teaching or studying Essays by Ralph Waldo Emerson.