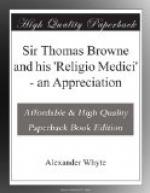 Thus there are two books from whence I collect my divinity—­besides that written one of God, another of His servant nature; that universal and public manuscript, that lies expanded unto the eyes of all—­those that never saw Him in the one, have discovered Him in the other.  This was the scripture and theology of the heathens; the natural motion of the sun made them more admire Him, than its supernatural station did the children of Israel; the ordinary effects of nature wrought more admiration in them than in the other all His miracles:  surely the heathens knew better how to join and read these mystical letters, than we Christians, who cast a more careless eye on these common hieroglyphics, and disdain to suck divinity from the flowers of nature.  Nor do I so forget God as to adore the name of nature; which I define not with the schools, to be the principle of motion and rest, but that straight and regular line, that settled and constant course the wisdom of God hath ordained the actions of His creatures, according to their several kinds.  To make a revolution every day, is the nature of the sun, because of that necessary course which God hath ordained it, from which it cannot swerve, by a faculty from that voice which first did give it motion.  Now this course of nature God seldom alters or perverts, but like an excellent artist hath so contrived His work, that with the selfsame instrument, without a new creation, He may effect His obscurest designs.  Thus He sweeteneth the water with a wood, preserveth the creatures in the ark, which the blast of His mouth might have as easily created; for God is like a skilful geometrician, who when more easily, and with one stroke of his compass, he might describe or divide a right line, had yet rather to do this in a circle or longer way, according to the constituted and fore-laid principles of his art:  yet this rule of His He doth sometimes pervert, to acquaint the world with His prerogative, lest the arrogancy of our reason should question His power, and conclude He could not.  And thus I call the effects of nature the works of God, whose hand and instrument she only is; and therefore to ascribe His actions unto her, is to devolve the honour of the principal agent upon the instrument; which, if with reason we may do, then let our hammers rise up and boast they have built our houses, and our pens receive the honour of our writing. . . .  Now nature is not at variance with art, nor art with nature:  they being both servants of His providence.  Art is the perfection of nature:  were the world now as it was the sixth day, there were yet a chaos.  Nature hath made one world, and art another.  In brief, all things are artificial; for nature is the art of God.