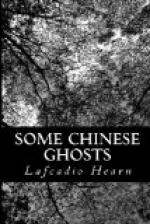 THE TALE OF THE PORCELAIN-GOD

[Illustration:  Line drawing of a head]

The Soul of the Great Bell

She hath spoken, and her words still resound in his ears.

THE SOUL OF THE GREAT BELL

The water-clock marks the hour in the Ta-chung sz’,—­in the Tower of the Great Bell:  now the mallet is lifted to smite the lips of the metal monster,—­the vast lips inscribed with Buddhist texts from the sacred Fa-hwa-King, from the chapters of the holy Ling-yen-King!  Hear the great bell responding!—­how mighty her voice, though tongueless!—­KO-NGAI! All the little dragons on the high-tilted eaves of the green roofs shiver to the tips of their gilded tails under that deep wave of sound; all the porcelain gargoyles tremble on their carven perches; all the hundred little bells of the pagodas quiver with desire to speak. KO-NGAI!—­all the green-and-gold tiles of the temple are vibrating; the wooden goldfish above them are writhing against the sky; the uplifted finger of Fo shakes high over the heads of the worshippers through the blue fog of incense! KO-NGAI!—­What a thunder tone was that!  All the lacquered goblins on the palace cornices wriggle their fire-colored tongues!  And after each huge shock, how wondrous the multiple echo and the great golden moan and, at last, the sudden sibilant sobbing in the ears when the immense tone faints away in broken whispers of silver,—­as though a woman should whisper, “Hiai!” Even so the great bell hath sounded every day for well-nigh five hundred years,—­Ko-Ngai:  first with stupendous clang, then with immeasurable moan of gold, then with silver murmuring of “Hiai!” And there is not a child in all the many-colored ways of the old Chinese city who does not know the story of the great bell,—­who cannot tell you why the great bell says Ko-Ngai and Hiai!

Now, this is the story of the great bell in the Ta-chung sz’, as the same is related in the Pe-Hiao-Tou-Choue, written by the learned Yu-Pao-Tchen, of the City of Kwang-tchau-fu.

Nearly five hundred years ago the Celestially August, the Son of Heaven, Yong-Lo, of the “Illustrious,” or Ming, dynasty, commanded the worthy official Kouan-Yu that he should have a bell made of such size that the sound thereof might be heard for one hundred li.  And he further ordained that the voice of the bell should be strengthened with brass, and deepened with gold, and sweetened with silver; and that the face and the great lips of it should be graven with blessed sayings from the sacred books, and that it should be suspended in the centre of the imperial capital, to sound through all the many-colored ways of the City of Pe-king.