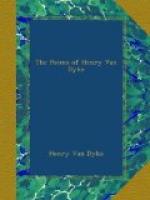 Get The Poems of Henry Van Dyke from Amazon.com
View the Study Pack

Henry van Dyke
This eBook from the Gutenberg Project consists of approximately 381 pages of information about The Poems of Henry Van Dyke.

It was my lot of late to travel far
Through all America’s domain,
A willing, gray-haired servitor
Bearing the Fiery Cross of righteous war.
And everywhere, on mountain, vale and plain,
In crowded street and lonely cottage door,
I saw the symbol of the bright blue star.
Millions of stars!  Rejoice, dear land, rejoice
That God hath made thee great enough to give
Beneath thy starry flag unfurled
A gift to all the world,—­
Thy living sons that Liberty might live.

It seems but yesterday they sallied forth Boys of the east, the west, the south, the north, High-hearted, keen, with laughter and with song, Fearless of lurking danger on the sea, Eager to fight in Flanders or in France Against the monstrous German wrong, And sure of victory!  Brothers in soul with British and with French They held their ground in many a bloody trench; And when the swift word came—­ Advance! Over the top they went through waves of flame,—­ Confident, reckless, irresistible, Real Americans,—­ Their rush was never stayed Until the foe fell back, defeated and dismayed.  O land that bore them, write upon thy roll Of battles won To liberate the human soul, Chateau Thierry and Saint Mihiel And the fierce agony of the Argonne; Yea, count among thy little rivers, dear Because of friends whose feet have trodden there, The Marne, the Meuse, and the Moselle.

Now the vile sword
In Potsdam forged and bathed in hell,
Is beaten down, the victory given
To the sword forged in faith and bathed in heaven.
Now home again our heroes come:
Oh, welcome them with bugle and with drum,
Ring bells, blow whistles, make a joyful noise
Unto the Lord,
And welcome home our blue-star boys,
Whose manhood has made known
To all the world America,
Unselfish, brave and free, the Great Republic,
Who lives not to herself alone.

But many a lad we hold
Dear in our heart of hearts
Is missing from the home-returning host.
Ah, say not they are lost,
For they have found and given their life
In sacrificial strife:
Their service stars have changed from blue to gold!
That sudden rapture took them far away,
Yet are they here with us to-day,
Even as the heavenly stars we cannot see
Through the bright veil of sunlight,
Shed their influence still
On our vexed life, and promise peace
From God to all men of good will.

More summaries and resources for teaching or studying The Poems of Henry Van Dyke.