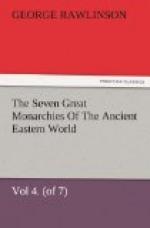 Get The Seven Great Monarchies Of The Ancient Eastern World, Vol 4. (of 7): Babylon from Amazon.com
View the Study Pack

The Seven Great Monarchies Of The Ancient Eastern World, Vol 4. (of 7): Babylon eBook

George Rawlinson
This eBook from the Gutenberg Project consists of approximately 206 pages of information about The Seven Great Monarchies Of The Ancient Eastern World, Vol 4. (of 7).

to defend himself with vigor.  It was not long before the Babylonians arrived.  Determined to crush the daring state, which, weak as it was, had yet ventured to revolt against him now for the fourth time, Nebuchadnezzar came in person, “he and all his host,” against Jerusalem, and after overcoming and pillaging the open country, “built forts” and besieged the city.  Uaphris, upon this, learning the danger of his ally, marched out of Egypt to his relief; and the Babylonian army, receiving intelligence of his approach, raised the siege and proceeded in quest of their new enemy.  According to Josephus a battle was fought, in which the Egyptians were defeated; but it is perhaps more probable that they avoided an engagement by a precipitate retreat into their own country.  At any rate the attempt effectually to relieve Jerusalem failed.  After a brief interval the siege was renewed; a complete blockade was established; and in a year and a half from the time of the second investment, the city fell.

Nebuchadnezzar had not waited to witness this success of his arms.  The siege of Tyre was still being pressed at the date of the second investment of Jerusalem, and the Chaldaean monarch had perhaps thought that his presence on the borders of Phoenicia was necessary to animate his troops in that quarter.  If this was his motive in withdrawing from the Jewish capital, the event would seem to have shown that he judged wisely.  Tyre, if it fell at the end of its thirteen years’ siege, must have been taken in the very year which followed the capture of Jerusalem, B.C. 585.  We may suppose that Nebuchadnezzar, when he quitted Jerusalem and took up his abode at Eiblah in the Coele-Syrian valley, turned his main attention to the great Phoenician city, and made arrangements which caused its capture in the ensuing year.

The recovery of these two important cities secured to the Babylonian monarch the quiet possession thenceforth of Syria and Palestine.  But still he had not as yet inflicted any chastisement upon Egypt; though policy, no less than honor, required that the aggressions of this audacious power should be punished.  If we may believe Josephus, however, the day of vengeance was not very long delayed.  Within four years of the fall of Tyre, B.C. 581, Nebuchadnezzar, he tells us, invaded Egypt, put Uaphris, the monarch who had succored Zedekiah, to death, and placed a creature of his own upon the throne.  Egyptian history, it is true, forbids our accepting this statement as correct in all its particulars.  Uaphris appears certainly to have reigned at least as late as B.C. 569, and according to Herodotus, he was put to death, not by a foreign invader, but by a rebellious subject.  Perhaps we may best harmonize the conflicting statements on the subject by supposing that Josephus has confounded two distinct invasions of Egypt, one made by Nebuchadnezzar in his twenty-third year, B.C. 581, which had no very important consequences, and the other eleven years later, B.C. 570, which terminated in the deposition of Uaphris, and the establishment on the throne of a new king, Amasis, who received a nominal royalty from Chaldaean monarch.

More summaries and resources for teaching or studying The Seven Great Monarchies Of The Ancient Eastern World, Vol 4. (of 7): Babylon.