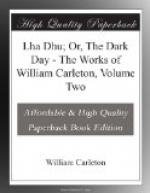 Get Lha Dhu; Or, The Dark Day from Amazon.com
View the Study Pack

William Carleton
This eBook from the Gutenberg Project consists of approximately 46 pages of information about Lha Dhu; Or, The Dark Day.

There is no country in the world whose scenery is more sweetly diversified, or more delicately shaded away into that exquisite variety of surface which presents us with those wavy outlines of beauty that softly melt into each other, than is that of our own green island.  Alas! how many deep valleys, wild glens, green meadows, and pleasant hamlets, lie scattered over the bosom of a country, peopled by inhabitants who are equally moved by the impulses of mirth and sorrow; each valley, and glen, and pleasant hamlet marked by some tearful remembrance of humble calamity of which the world never hears.  How little do its proud nobility know of the fair and still beauty which marks the unbroken silence of its most delightful retreats, or of the unassuming records of love or sorrow, which pass down through a single generation, and are soon lost in the rapid stream of life.  We do not love to remember sorrow, but its traces, notwithstanding, are always the most uneffaceable, and, what is strange as true, its mournful imprint remains ever the longest upon the heart that is most mirthful.  We talk not now of the hollow echo, like mirth, which comes from thousands only because the soul is wanting.  No; but we say that as the diamond is found in the darkness of the mine, as the lightning shoots with most vivid flashes from the gloomiest cloud, so does mirthfulness frequently proceed from a heart susceptible of the deepest melancholy.  Many and true are the simple tales of Irish life which could prove this.  Many a fair laughing girl who has danced in happiness, light as a mote in the sunbeam, has been suddenly left in darkness, bowed down in youth and beauty to the grave, and though the little circle of which she was the centre may have been disturbed by her untimely life, yet in brief space, except to a few yearning and stricken hearts who could not forget her who was once their pride and hope, her Memory has passed away like a solitary bird, viewed as it goes over us, and followed wistfully, by the eye, until by degrees it lessens and lessens—­becomes dim—­then fades into a speck, and ultimately melts into the blue distance of heaven.  One such a “simple annal,” brought about by the inscrutable hand that guides the destinies of life, we are now about to present to our readers.  Were it the mere creation of our fancy, it might receive many of those embellishments at our hand with which we scruple not to adorn the shadowy idealities of fiction.

It is, however, one of those distressing realities so often produced by the indulgence of vehement passion, that we are compelled by the melancholy severity of its truth to give the details of, not, alas, as we could have wished them to happen, but simply as they occurred.

More summaries and resources for teaching or studying Lha Dhu; Or, The Dark Day.