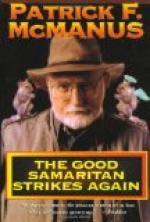 Get A Good Samaritan from Amazon.com
View the Study Pack

This eBook from the Gutenberg Project consists of approximately 46 pages of information about A Good Samaritan.

The little District Telegraph boy, with a dirty face, stood at the edge of the desk, and, rubbing his sleeve across his cheek, made it unnecessarily dirtier.

“No—­yes—­wait a minute.”  Reed tore the yellow envelope and spread the telegram.  It read:

“Do I meet you at your office or at Martin’s and what time?”

“The devil!” Reed commented, and the boy blinked indifferently.  He was used to stronger.  “The casual Rex all over!  Yes, boy, there’s an answer.”  He scribbled rapidly, and the two lines of writing said this:

He fumbled in his pocket and gave the youngster a coin.  “See that it’s sent instantly—­like lightning.  Run!” and the sharp little son of New York was off before the last word was well out.

Half an hour later, to Reed waiting at his office in Broadway impatiently, there strolled in a good-looking and leisurely young man with black clothes on his back and peace and good-will on his face.  “Hope I haven’t kept you waiting, Carty,” he remarked in friendly tones.  “Plenty of time, isn’t there?”

“No, there isn’t,” his cousin answered, and there was a touch of snap in the accent.  “Really, Rex, you ought to grow up and be responsible.  It was distinctly arranged that you should call here for me at six, and now it’s a quarter before seven.”

“Couldn’t remember the hour or the place to save my life,” the younger man asserted earnestly.  “I’m just as sorry as I can be, Carty.  You see I did remember we were to dine at Martin’s.  So much I got all right—­and that was something, wasn’t it, Carty?” he inquired with an air of wistful pride, and the frown on the face of the other dissolved in laughter.

“Rex, there’s no making you over—­worse luck.  Come along.  I’ve got to go home to dress after dinner you see, before we make our call.  You’ll do, on the strength of being a theological student.”

The situation was this:  Reginald Fairfax, in his last year at the Theological Seminary, in this month of May, and lately ordained, had been seriously spoken of as assistant to the Rector of the great church of St. Eric’s.  It was a remarkable position to come the way of an undergraduate, and his brilliant record at the seminary was one of the two things which made it possible.  The other was the friendship and interest of his cousin, Carter Reed, head clerk in the law firm of Rush, Walden, Lee and Lee, whose leading member, Judge Rush, was also senior warden at St. Eric’s.  Reed had called Judge Rush’s attention to his young cousin’s career, and, after some inquiry, the vestryman had asked that the young man should be brought to see him, to discuss certain questions bearing on the work.  It was almost equivalent to a call coming from such a man, and Reed was delighted; but here his troubles began.

More summaries and resources for teaching or studying A Good Samaritan.