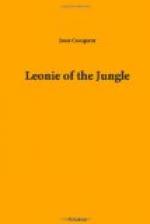 Get Leonie of the Jungle from Amazon.com
View the Study Pack

Leonie of the Jungle eBook

This eBook from the Gutenberg Project consists of approximately 312 pages of information about Leonie of the Jungle.

LEONIE OF THE JUNGLE

“To deliver thee from the strange woman!”—­The Bible.

“Who found the kitten?”

“Me,” quavered the childish voice.

Lady Susan Hetth tchcked with her tongue against her rather prominent teeth at the lamentable lapse in grammar, and looked crossly at Leonie, who immediately lifted up the quavering voice and wept.

Sobs too big for such a little girl shook the slender body, whilst great tears dripped from the long lashes to the tip of the upturned nose, down the chin and on the knee of the famous specialist, against which she rested.

“Stand up, Leonie, and push your hair out of your eyes!”

The thin little body tautened like an overstrung violin string, and a shock of russet hair was pushed hastily back from a pair of indefinable eyes, in which shone the light of an intense grief strange in one so young.

“Leave her to me, Lady Hetth!”

The surgeon’s voice was exceedingly suave but with the substratum of steel which had served to bend other wills to his with an even greater facility than the thumb of the potter moulds clay to his fancy.

“Please may I have a book instead of——­”

“Leonie, that is very rude.”

He lifted the child on to his knee, frowning at the weight, and smoothed the tangled mass of curls away from the low forehead with a touch which caused her to make a sound ’twixt sob and sigh, and to lie back against the broad shoulder.

It was a long and disjointed story, told in the inconsequent fashion of a child of seven unused to converse with her elders; and continually interrupted by the aunt, who, fretful and dying for her tea, jingled her distracting bracelets and chains, fidgeted with the Anglo-Indian odds-and-ends of her raiment, and disconcerted the child by the futile verbal proddings; which are as bad for the infant mind as the criminal attempts to force a baby to use its legs are to the infant body.

“So! and you found the dear little kitten lying quite still in the nursery this morning?”

“Do pronounce your r’s, Leonie.”

The child shivered in the man’s arms.

“Who told you it was strangled?”

The man’s hand closed for a moment on a heavy paper-weight as he looked across the room at the woman who was waggling her foot and knitting her scanty brows at the sound of the rending sobs.

More summaries and resources for teaching or studying Leonie of the Jungle.

Leonie of the Jungle from Project Gutenberg. Public domain.