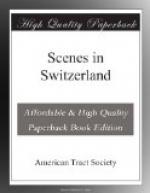 Get Scenes in Switzerland from Amazon.com
View the Study Pack

American Tract Society
This eBook from the Gutenberg Project consists of approximately 72 pages of information about Scenes in Switzerland.

One day a beautiful lady took refuge in the cottage; her carriage had broken down, and she must stop till the postilion could return to the castle.  At the cottage she heard Franz play and Nanette sing, and listened to the blind organist, as the cathedral bells broke on the evening air.

“You must come with me,” said the lady.  “We have been planning concerts at the castle, and you shall give them.”

“My children are not old enough to go by themselves, and I am blind,” replied the father.

“I will not deprive you of your children,” said the lady; “my father has influence.  And besides, he has near him an eminent physician; it is possible something can be done to restore your sight.”

In three days the lady returned, and carried Herr Hoffner with his wife and children to the castle.  Charmed with the young musicians, the elector repented of the thoughtless deed, in depriving the father of his position as kappelmeister.  Very tenderly did he treat him now, and under the care of the skilful physician, it was soon announced there was hope of his recovering his sight.  This done, he was once more offered the position; but Herr Hoffner was a just man; to do by others as he would be done by was his motto.  Herr Von Stein had filled the post acceptably; it was no fault of his that the old organist had lost his place.  Herr Hoffner would not accept it, but only asked that he might be allowed to give concerts with his children.  Franz labored diligently at his studies, and already was he beginning to surprise his friends, not only with his playing, but with his composition.

Years passed:  there was a great gathering in that grand old capital.  A musical festival was in progress, and all the celebrities the world over had congregated there.  Franz Hoffner was in the zenith of his glory.  At the close of the performance, and while the entire audience joined in acclamations of praise to the youthful leader, a rich medal was presented.  On one side the profile view of the elector and his daughter, set round with diamonds; on the other, “Music is only valuable as it lifts the heart and purifies our fallen nature.”

Franz Hoffner lived to be a great musician; but he never ceased to think of his parents and Nanette.  Honors were empty, and applause vain, only so far as they contributed to the happiness of those he loved.

The Glaciers Of Savoy

After a few weeks passed in Geneva, we determined to go on to Chamouni, and for this purpose engaged a guide accustomed for years to the mountain passes, and on whom we were told that we could rely implicitly.

More summaries and resources for teaching or studying Scenes in Switzerland.