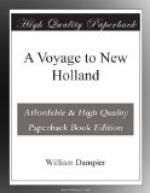 Beside this port of Bahia de todos los Santos there are 2 more principal ports on Brazil where European ships trade, namely Pernambuco and Rio de Janeiro; and I was told that there go as many ships to each of these places as to Bahia, and 2 men-of-war to each place for their convoys.  Of the other ports in this country none is of greater note than that of St. Paul’s where they gather much gold; but the inhabitants are said to be a sort of banditti, or loose people that live under no government:  but their gold brings them all sorts of commodities that they need, as clothes, arms, ammunition, etc.  The town is said to be large and strong.

The author’s stay and business at Bahia:  Of the winds, and seasons of the year there.

My stay here at Bahia was about a month; during which time the viceroy of Goa came hither from thence in a great ship, said to be richly laden with all sorts of India goods; but she did not break bulk here, being bound home for Lisbon; only the viceroy intended to refresh his men (of whom he had lost many, and most of the rest were very sickly, having been 4 months in their voyage hither) and so to take in water, and depart for Europe in company with the other Portuguese ships thither bound; who had orders to be ready to sail by the twentieth of May.  He desired me to carry a letter for him, directed to his successor the new viceroy of Goa; which I did, sending it thither afterwards by Captain Hammond, whom I found near the Cape of Good Hope.  The refreshing my men and taking in water was the main also of my business here; beside the having the better opportunity to compose the disorders among my crew:  which, as I have before related, were grown to so great a height that they could not without great difficulty be appeased:  however, finding opportunity during my stay in this place to allay in some measure the ferment that had been raised among my men, I now set myself to provide for the carrying on of my voyage with more heart than before, and put all hands to work, in order to it, as fast as the backwardness of my men would permit; who showed continually their unwillingness to proceed farther.  Besides, their heads were generally filled with strange notions of southerly winds that were now setting in (and there had been already some flurries of them) which, as they surmised, would hinder any farther attempts of going on to the southward so long as they should last.