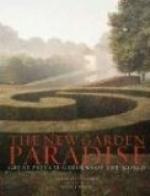 Get Paradise Garden from Amazon.com
View the Study Pack

This eBook from the Gutenberg Project consists of approximately 375 pages of information about Paradise Garden.

It might be better if Jerry Benham wrote his own memoir, for no matter how veracious, this history must be more or less colored by the point of view of one irrevocably committed to an ideal, a point of view which Jerry at least would insist was warped by scholarship and stodgy by habit.  But Jerry, of course, would not write it and couldn’t if he would, for no man, unless lacking in sensibility, can write a true autobiography, and least of all could Jerry do it.  To commit him to such a task would be much like asking an artist to paint himself into his own landscape.  Jerry could have painted nothing but impressions of externals, leaving out perforce the portrait of himself which is the only thing that matters.  So I, Roger Canby, bookworm, pedagogue and student of philosophy, now recite the history of the Great Experiment and what came of it.

It is said that Solomon and Job have best spoken of the misery of man, the former the most fortunate, the latter the most unfortunate of creatures.  And yet it seems strange to me that John Benham, the millionaire, Jerry’s father, cynic and misogynist, and Roger Canby, bookworm and pauper, should each have arrived, through different mental processes, at the same ideal and philosophy of life.  We both disliked women, not only disliked but feared and distrusted them, seeing in the changed social order a menace to the peace of the State and the home.  The difference between us was merely one of condition; for while I kept my philosophy secret, being by nature reticent and unassertive, John Benham had both the means and the courage to put his idealism into practice.

Life seldom makes rapid adjustments to provide for its mistakes, and surely only the happiest kind of accident could have thrown me into the breach when old John Benham died, for I take little credit to myself in saying that there are few persons who could have fitted so admirably into a difficult situation.

Curiously enough this happy accident had come from the most unexpected source.  I had tried and failed at many things since leaving the University.  I had corrected proofs in a publishing office, I had prepared backward youths for their exams, and after attempting life in a broker’s office downtown, for which I was as little fitted as I should have been for the conquest of the Polar regions, I found myself one fine morning down to my last few dollars, walking the streets with an imminent prospect of speedy starvation.  The fact of death, as an alternative to the apparently actual, did not disconcert me.  I shouldn’t have minded dying in the least, were it not for the fact that I had hoped before that event to have expounded for modern consumption certain theories of mine upon the dialectics of Hegel.  As my money dwindled I was reduced to quite necessary economies, and while not what may be called a heavy eater, I am willing to admit that there were times when I felt distinctly empty.  Curiously enough, my philosophy did little to relieve me of that physical condition, for as someone has said, “Philosophy is a good horse in the stable, but an arrant jade on a journey.”

More summaries and resources for teaching or studying Paradise Garden.