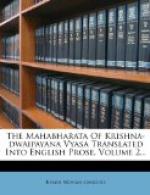 “Sanjaya continued, ’Hearing those words of Kesava, Vibhatsu also, O Kauravya, said these words unto that chastiser of foes, viz., the Rakshasa Ghatotkacha, ’O Ghatotkacha, thyself, the long-armed Satyaki, and Bhimasena, the son of Pandu, these three, in my judgment, are the foremost ones among all our warriors.  Go and encounter Karna in single combat this night.  The mighty car-warrior Satyaki will protect thy rear.  Assisted by Satwata hero, slay brave Karna in battle, as Indra in days of old had slain (the Asura) Taraka, aided by (the celestial generalissimo) Skanda.’

“Ghatotkacha said, ’I am match for Karna, as also for Drona, O Bharata, or for any illustrious Kshatriya accomplished in weapons.  This night I shall fight such a battle with the Suta’s son as will form the subject of talk as long as the world lasts.  Tonight, I will spare neither the brave nor the timid nor those that will, with joined hands, pray for quarter.  Following the Rakshasa usage, I shall slay all.’

“Sanjaya continued, Having said these words, that slayer of hostile heroes, viz., the son of Hidimva, rushed against Karna in that dreadful fight frightening thy troops.  The Suta’s son, that tiger among men, smilingly received that angry warrior of blazing mouth and blazing locks.  The battle then that took place between Karna and that Rakshasa, both roaring against each other, O tiger among kings, resembled that between Indra and Prahlada (in days of yore).’

“Sanjaya said, ’Beholding the mighty-armed Ghatotkacha, O king, proceeding towards the car of Suta’s son, Karna for slaughtering him in battle, thy son Duryodhana addressing Duhsasana, said these words, ’The Rakshasa, seeing the prowess of Karna in battle, is speedily advancing against him.  Resist that mighty car-warrior.  Surrounded by a mighty force proceed to that spot where the mighty Karna, the son of Vikartana, is contending with the Rakshasa in battle.  O giver of honours, surrounded by troops and exerting thyself vigorously, protect Karna in battle.  Let not the terrible Rakshasa slay Karna in consequence of our carelessness.  Meanwhile, O king, Jatasura’s mighty son, that foremost of smiters, approaching Duryodhana, said unto him, ’O Duryodhana, commanded by thee, I desire to slay, with their followers, thy foes of celebrity, viz., the Pandavas, those warriors incapable of being easily defeated in battle.  My father was mighty Jatasura, that foremost of Rakshasa.  Formerly, having performed some Rakshasa slaying incantations, the despicable sons of Pritha slew him.  I desire to worship my dead sire by offering him the blood of his foes, and their flesh, O monarch! it behoveth thee to grant me permission.’  The king, thus addressed, became exceedingly delighted and said unto him repeatedly, ’Aided by Drona and Karna and others, I am quite competent to vanquish my foes.  Commanded, however, by me, O Rakshasa, go thou to