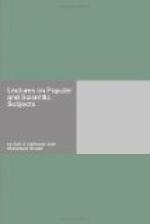 general, prompt us to a wiser study of our social wants, and the means at our command for further social improvement; which we might prosecute with less and less recourse to the stimulant virtues of malt in such forms as whisky.  And this we may do, if we limit our indulgence in it to the less potent form of it in beer, which, while it is calculated to quench man’s bodily thirst, is equally calculated to quicken his mental.  How much it contributes to allay the former, and how many thirsty souls are refreshed by it, we may estimate from the statistics of the sale of it furnished by a single firm in London.  I refer to the firm of the Messrs. Foster, Brook Street, who are friends of my own, and to whom I should be glad to refer all who may be in want of a wholesome beer, for theirs is so good and genuine.  The Messrs. Foster are among the most extensive bottlers and exporters in the country; and I find from the information they have kindly supplied me, that the beer bottled by them for export purposes during the year 1874 was 6000 butts, of 108 gallons each; that their contracts for the supply of bottles during that period represented 25,000 gross, or 5,040,000 bottles, which, if laid end to end, would extend to about 1000 miles; and that their accounts with Bass & Co. alone for that term amounted to L150,000.  All, from the highest to the lowest, drink beer in England; and when unadulterated and taken in moderation, it is one of the most healthful beverages of which the human being, man or woman, can partake.

Though I have only partially gone over the ground contemplated at first, I feel I must now draw to a conclusion, which I am the less indisposed to do, as I think in what I have said I have pretty fairly set before you the wonderful properties latent in a basin of hodge-podge.  For it is a habit of mine, which I have sought to indulge on the present occasion, to analyse every subject to which my attention is directed, and in which I feel interest, before I can make up my mind as to the proper significance and importance of the whole compound.  Thus, for instance, set a dish of hodge-podge before me; it does not satisfy me to be told that it is only a basin of broth, and that it is wholesome fare; I must, as I have now been doing in a way, resolve the compound into its elements, see these in other and wider relations, and refer them mentally to their rank and standing in the larger world of the economy of nature and of social existence.  I am always asking “What’s intilt?” and am never satisfied, any more than the English tourist, with a bare enumeration:  I must subject the factors included to rational inspection, and watch their play and weigh their worth in connection with interests more general.